Powered by
What is Hepatic Carcinoma?

Hepatic Carcinoma/ Hepatocellular Carcinoma HCC are the cancer of the liver. Primary Liver Cancer arrives from the liver hepatocytes whereas Secondary liver cancer is spread of cancer from other organs (colon, lung, breast, pancreas and stomach) to the liver.

Hepatic carcinoma is the 8th most common cancer in women and 5th most common cancer in men worldwide. It occurs more commonly in men than women. There is about 560,000 new cases worldwide every year. Age of diagnosis is usually over 50. It is highest in areas where hepatitis B and C infections is prevalent as in Asia and sub-Saharan Africa. Hepatitis B vaccination has greatly reduced the incidence of Hepatic carcinoma.

The median survival from the time of diagnosis is about 6 months. Survival rate greatly depends on the extent of liver cirrhosis (chronic disease whereby normal liver tissue is replaced with fibrous tissue and loss of liver cell function), extent on liver failure and portal vein occlusion. Death is usually caused by cachexia, variceal bleeding, hepatic failure, tumor bleeding or bleeding into the peritoneum.
Causes of Hepatic Carcinoma

1. Chronic Hepatitis B and C infection:

Patients will usually present with symptoms of advancing liver cirrhosis. These include:

2. Jaundice: As the bilirubin rises, the skin and sclera of the eyes turn yellow resulting in jaundice.

4. Variceal bleeding: When the portal vein is blocked, this result in increased pressure in the esophageal veins resulting in dilatation of the veins forming esophageal varices that has a tendency to bleed.

5. Loss of weight and appetite: As the cancer progresses there will be a significant weight loss, loss of appetite and general lethargy.

6. Ascites: The patient will experience abdomen distension and accumulation of fluid in the peritoneum

7. Right Upper abdomen pain: As the tumor enlarges, bleeds or ruptures it will cause pain over the right upper quadrant abdomen.

8. Hepatic Encephalopathy: Late stages of liver cancer will cause liver failure and lead to confusion, altered mental status and coma.

Physical examination of the patient will reveal a jaundiced cachectic (physical wasting with loss of weight and muscle mass due to disease) patient who has abdomen ascites, enlarged liver, enlarged spleen, pedal edema (swelling of lower limbs), peri-umbilical collateral veins (dilated veins seen on the abdomen) and enlarged hemorrhoids (Piles).

Alcoholic cause of longstanding liver disease will result in dupuytren contracture (painless thickening and contracture of tissue beneath the skin on the palm of the hand and fingers) and spider naevi (A superficial spider-like cluster of capillaries beneath the skin) in the patients. In patients with hepatic encephalopathy they will have asterixis (flapping tremor of the hand), appear confused or comatose.
Diagnostic Tests for Hepatic Carcinoma

Staging of hepatic carcinoma is by the TNM system which involves the Tumor invasion extent, lymph Nodes involved and whether there is metastasis (spread of cancer to other organs). 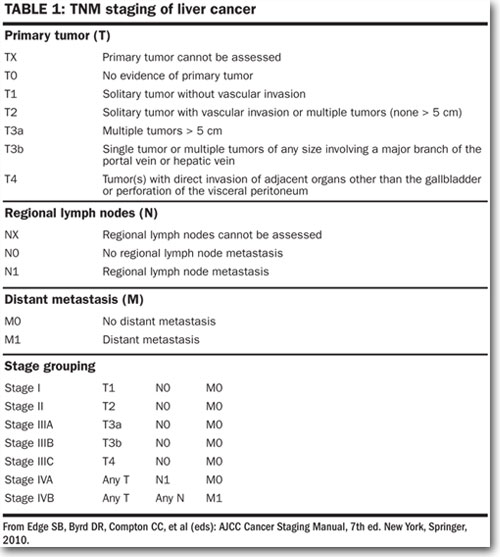 Liver cirrhosis severity is classified by Child-Pugh scoring which determine the severity of liver disease on the basis of serum albumin, bilirubin, prothrombin time, ascites , and encephalopathy .The higher the score the more severe the liver disease.

There is a system called CLIP (Cancer of the Liver Italian Program) scoring system that predicts the median survival time and overall prognosis of patients with liver cancer. The score ranges from 0-6 and is based on Child-Pugh stage, tumor morphology, alpha-fetoprotein level and portal vein thrombosis.

Score of 0-2 is assigned to the 4 features and cumulative score system is calculated using the CLIP system as illustrated below:


Estimated survival based on the CLIP Score:

The treatment modalities available for liver cancer depend on a variety of factors like the size, location and number of tumors, whether there is liver cirrhosis, has the cancer spread to other organs, the functional status of the patient, suitability for liver transplant, patency of the portal vein and other co-morbid diseases.

The overall survival rate of a patient with liver cancer symptoms is about 2-3 months. Before commencing treatment, complications of liver cancer like cirrhosis, ascites, variceal bleeding, hepatic encephalopathy and spontaneous bacteria peritonitis should be treated first. Treatment is aim to prolong life without compromising quality of life.

Liver transplant and surgery resection are the only chances of cure. Suitability depends on the tumor size, the remaining liver function and if the cancer has spread. So far only about 5% of patients are suitable for liver transplant which has about 75% of 5 year survival rate and a cancer recurrence of less than 15% in 5 years.

Surgery provides the best possibility of a cure. In United States, only 5% of patients are suitable for surgical resection. Patients who have solitary hepatocellular carcinoma with no invasions of vessels and a well preserved liver function have the best outcomes from surgery. Many surgeons use a tumor size of < 5 cm as a cut off on tumor size criteria.

The 5 year survival rates for those who undergone liver resection ranges from 30% to 90%. The liver has the capability to regenerate post resection. A healthy liver can have up to 75% removed and the remainder tissue will regenerate to normal size in 6 months. However, in patients with liver cirrhosis the regeneration may be limited.

The liver has right and left lobes divided into a total of 8 segments. The liver surgical resections include resection of either the right/left lobe, extended lobectomy (more than 1 lobe resection) or segmental lobectomy (part of a lobe).
Liver Transplantation

Liver transplantation not only eliminates the cancer and also cures underlying liver disease. It can be considered in patients who meet Milan Criteria: tumor less than 5 cm or up to 3 tumors which are less than 3 cm. 5 year survival rate is about 50-60%.
Localized Treatment modalities

Those who do not fulfill the criteria for surgical treatment can undergo localized treatments.

Under ultrasound guidance, a RFA needle probe is inserted into the tumor, a high frequency alternating current is developed to the electrode, heating up the tumor tissue above 60 degrees resulting in the tumor cells to die and necrosis.

This procedure is suitable for tumors less than 4 cm in size. The local recurrence rate is about 5-6 % in 20 months. Larger tumors have a higher recurrence rates. However patients eventually develop liver/extra-liver diseases from pre-existing micro-satellite cancer lesions.

Under ultrasound guidance, the liquid nitrogen filled probe is targeted on tumors less than 5cm and using sub-zero temperatures it is used to freeze the cancer cells destroying them. This procedure is well tolerated.
Percutaneous ethanol or acetic acid ablation

Under ultrasound guidance, percutaneous injection of ethanol/acetic acid into the tumor causing the cancer cells to die. This procedure is reserved for patients with small tumors. Currently Radiofrequency Ablation treatment is more favorable than this older technique.
CyberKnife

This is a new technology combining robotics and imaging guidance to deliver concentrated and highly focused radiation beams to the targeted hepatic carcinoma while avoiding radiation to other healthy tissues. Currently only few medical centers have this technology and long term effects is still unknown.
Chemoembolization

Chemoembolization is a chemotherapy treatment whereby high concentrations of chemotherapy drugs are injected into the hepatic artery which usually supplies the cancer tissue. The normal liver tissues usually get blood supply from the portal vein system. Up to 85% of the anti-cancer drugs are trapped in the liver hence minimizing the systemic side effects.
Radioembolization

Selected internal radiotherapy involves targeting the liver cancer cells with yttrium-90 radiation to cause cancer cells necrosis. It is suitable for patients with portal vein thrombosis which may not be able to go through chemoembolization.
Chemotherapy

For patients who are not suitable for liver surgery, liver transplant or localized tumor ablation modalities, systemic chemotherapy is the mainstay treatment. However hepatic carcinoma responds poorly to chemotherapy.

Chemotherapy systemic side effects are usually less well-tolerated as compared to localized tumor ablation options. By far, the most effective chemotherapy drugs include Cisplatin, Fluorouracil and Doxorubicin. Response rate is about 10%.

Using immune-modulatory drugs like interferon-alpha in conjunction with chemotherapy may increase response rates to 20% but the treatment related toxicity is significant.
Other Drugs

Anti-angiogenesis agents like bevacizumab works by disrupting the formation of new blood vessels that feed the tumor cells. When used alone, it has limited clinical use. A combination of bevacizumab with gemcitabine and oxaliplatin will produce a possible 20% response rate.

Sorafenib, a multi-targeted oral kinase inhibitor, is a new drug which has been shown to improve survival rate in the trial phase.
Follow up

Post treatment, patient should undergo regular follow up with their doctors. Imaging studies to monitor regression/progression will be done every 2-3 months. Blood tests like liver function test, Alpha-fetoprotein cancer marker should be monitored monthly.

1. Hepatitis B vaccination: As hepatitis B infection increases the risk of hepatic carcinoma, childhood vaccination against hepatitis B has greatly reduced its incidence.

2. Reduces risk of Hepatitis B/C: As hepatitis B/C is transmitted via sexual transmission and blood transmission. One should not engage in unprotected sex, avoid intravenous drug abuse/sharing of needles and go to proper sterilized shops for piercing and tattoos. Babies born to mothers who are hepatitis B positive should get vaccinated and given hepatitis immunoglobulin at birth to reduce the risk of contraction.

5. Avoiding Aflatoxins that are toxic to the liver. Food storage is important to avoid Aflatoxin contamination of food.