4. HIV infection and other immune compromised states: more susceptible to contracting infection and weaken immune system to fight it

5. Smoking: cigarette contains nicotine which is a cancer causing agent 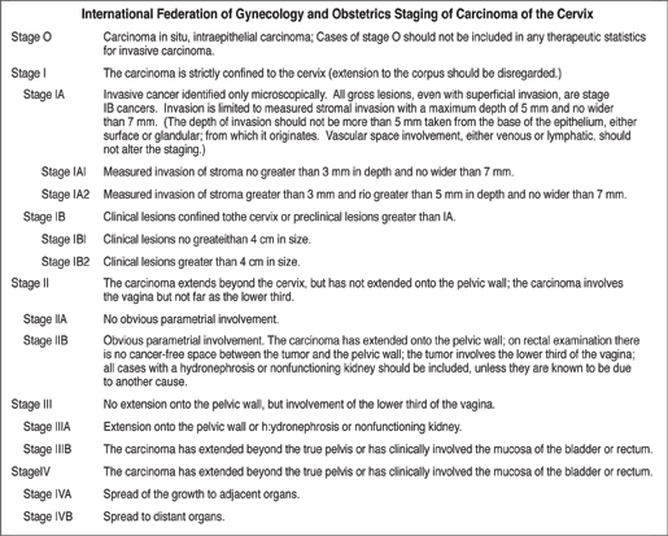 2. Abnormal bleeding in between periods or after menopause

6. Common sites where the cancer will spread distantly are the extra-pelvic lymph nodes, lungs, liver and bones.
Physical signs of Cervical Cancer

1. Pap smear: A screening test often done every 3 yearly for all sexually active patients to detect pre-cancerous cervical cancer. A speculum is inserted into the vaginal to visualize the cervix and using a brush cells are scraped from the cervix and sent to the laboratory. If any abnormalities detected, they should proceed to do a colposcopy.
2. HPV DNA Test: For those above 30 years old, HPV DNA test is to determine presence of HPV virus, cervical cells are sent to the laboratory for testing using The Hybrid Capture II assay.

3. Colposcopy: An outpatient procedure using a colposcope (microscope) to look for any suspicious abnormal changes of the cervix. A biopsy will be done to send the abnormal tissue to the laboratory to test for presence of cancerous cells.
4. Imaging studies: If cervical cancer is confirmed, then imaging studies will be done to stage the cancer and see how far it has spread in the body. Chest x-ray, CT scan, MRI scans and PET scans are modalities to look for cancer extension.

1. Simple hysterectomy: Removal of the uterus (womb) and cervix.

3. Fertility Sparing Surgery: only reserved for very early stages of cancer as it only removes the cervix and preserves the uterus (womb) for fertility purposes.
Different stages have different treatment:

1. Stage 0 (carcinoma in situ): Treated with surgery local ablative or excisional measures such as cryosurgery, laser ablation, and loop excision.