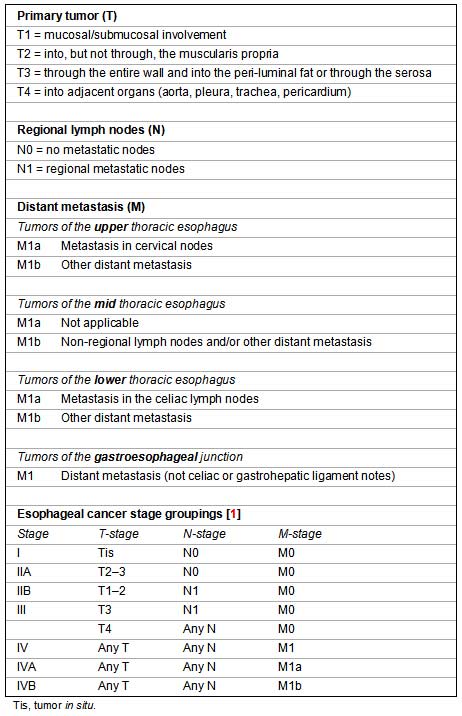 1. Loss of weight: this is present in 50% of patients and is 2nd commonest symptom.

2. Vomiting of blood (Hematemesis): bleeding from the cancer mass

3. Pain: Upper central abdomen (epigastrium) pain may be experienced by patients. If patients have bone pain it may suggest that cancer has spread to the bones.

4. Hoarse voice: If the tumor has invaded the laryngeal nerve it can cause hoarseness of voice.

5. Persistent cough: can be caused by gastric reflux symptoms

6. Aspiration of food: if the cancer has invaded into the trachea and bronchus it can cause food to regurgitate into the lungs and cause aspiration pneumonia.

7. Heartburn: Some patients may have vague heartburn and indigestion which may be mistaken for gastritis and gastric reflux.
Physical signs of esophageal cancer

1. Esophagogastroduodenoscopy (OGD): An endoscope which is a hollow tube with a lens is inserted through the mouth and down the esophagus to the stomach to allow visualization of any possible ulcer, mass or bleeding points. Suspicious mass tissue will be removed (biopsy) and sent to the laboratory to confirm presence of cancerous cells.
2. Endoscopic ultrasonography (EUS): using endoscopy procedure to do an ultrasound visualization is a good modality as it allows clinician to determine the Tumor (T) death and whether there is presence of peri-esophageal lymph nodes (N) which is used for staging of disease.
3. Barium swallow: Patient will drink a liquid called barium which will coats the lining of esophagus for a series of x-rays to be taken to examine the esophagus. It is good to look for any strictures and mass in the esophagus. However it cannot be used for staging and biopsy.
4. Bronchoscopy: Inserting a tube into the trachea and bronchus is used for cancers of the middle and upper third of the thoracic esophagus to exclude invasion of cancer cells to the trachea or bronchi.
5. CT Scans: Ct scan imaging of the thoracic and abdomen is used for staging of the disease to look for extension of the disease to distant organs like lungs or liver.

6. PET Scan: A more advance imaging modality to determine spread of cancer to other organs, lymph nodes or bones.
Treatment of esophageal cancer

- Patients who are medically unfit for surgery such as patients with severe cardiovascular disease and respiratory disease.

- Respiratory complications (15-20%) such as atelectasis (partial collapse of lung), pleural effusion, and pneumonia

- Infections (10%) such as wound infection, anastomotic leak (breakdown of the new connection between the stomach and esophagus), and pneumonia
Chemotherapy and Radiotherapy